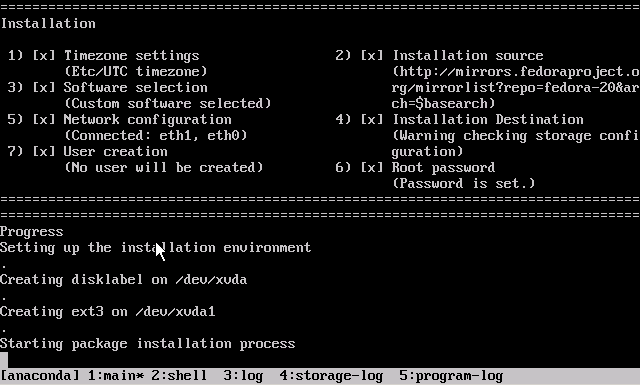 Earlier this year, I installed Xen Cloud Platform (XCP) 1.6 on an off-lease Dell CS24-TY with two quad-core Intel Xeon CPUs and 72 GB of RAM. (Those machines are sold by Dell Financial Services and on eBay for unbelievably low prices, for previous generation servers of such capability.) When Citrix open-sourced XenServer, I decided to upgrade XCP 1.6 to the full-featured XenServer 6.2.0 SP1, which added a few formerly-proprietary features for larger pools (which I do not have) and improved guest support for various OSes including Windows 8/Server 2012 among other changes.

At the same time, I started looking at switching domUs from Ubuntu—which worked great, by the way—to Fedora. This was purely due to personal preference, given my penchant for keeping software up-to-date even at the risk of instability, not any failings of Ubuntu.

The issue, of course, is that Fedora isn’t supported out of the box by XenServer or its management console XenCenter, and the wealth of knowledge out there typically pertains to older versions of Fedora and XenServer. Some IT firm even posted a tip to use the “Other install media” option for installing Fedora 20, which practically defeats the point of using Xen virtualization, since that creates a fully-virtualized guest (HVM) rather than a paravirtualized domU.

So I set out to update the existing methods of installing older versions of Fedora as a paravirtualized guest to the new release, Fedora 20 “Heisenbug”.

Credit where credit is due

I’m a sucker for giving credit to everyone and anyone, but in this case a few sources really formed the basis for what I’ve done:

Needless to say, both of these sources are super helpful, although none of them really work out of the box for what I’m doing.

If you’re already experienced and you’re just looking for the kickstart, here it is. For installation instructions, see below.

I’ve created a GitHub repository for these, and I might add files for RHEL/CentOS 6.5 in the future, too.

The master-branch files are typically tested, while the develop-branch files may introduce new features that are not yet fully vetted. (As the MIT License describes, everything is provided with no guarantees.)

Update: now, the post-installation script doesn’t bother with a fake menu.lst at all, and instead makes GRUB2 configuration files. Based on reports that making slight alterations to the autogenerated GRUB2 grub.cfg file to make it compatible works, and based on the changes made to pygrub in upstream Xen (which have not yet been integrated into XenServer 6.2.0 SP1), I made the script tweak GRUB2 files and regenerate a grub.cfg with grub2-mkconfig. This should be robust enough to support future kernel updates!

How to use this kickstart (with screenshots!)

This procedure assumes that you’re familiar with XenCenter and have it running already. END_OF_DOCUMENT_TOKEN_TO_BE_REPLACED