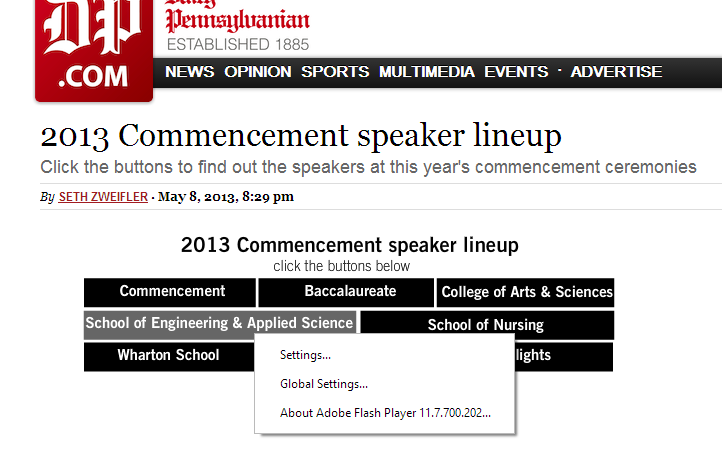 I’m calling out The Daily Pennsylvanian for worst uses of Flash, ever. Flash animations make sense when interactivity is demanded, and only then, in rare cases.

A couple of months ago, this happened: a post lauding the university for winning the 2012 CIO 100 Award for mobile-friendly sites, using Flash as the only content on the page:

To top it off, guess what the mobile site shows on a phone?

I wouldn’t be so mad if it were a one-time thing. But then this illustration of our commencement speakers was published this week:

Again, a blank article shows on mobile. And it’s not just my phone that does this: development of Flash for mobile was halted nearly 2 years ago, and iOS has clearly not had Flash since the start.

But my gripe isn’t with Flash itself, or even with mobile compatibility — I’m just upset that people are using a medium that doesn’t make sense for things that shouldn’t even be interactive. I get it; college kids like to play around with software, or whatever. But you guys gotta stop this.

One Reply to “When NOT to use Flash”