Once upon a time, consumers could band together in class actions against big companies when they were collectively aggrieved. Often, the injury to each person on her own was small — but the cumulative effect was a wrong on the business’s part. So, for example, Microsoft had been sued for various competition law abuses — class actions that the company expected to cost it $1.9–2.0 billion to resolve.[1] But those class actions are a thing of the past — as Microsoft and other companies have been making consumers surrender the ability to participate in one.

Arbitration agreements do more harm to consumers than merely prevent class actions, even if arbitrators are as fair to plaintiffs as judges would be; arbitration can make it more difficult to assert a meritorious claim on one’s own as compared to going to court. Procedural rules differ in arbitration, and the ability to conduct discovery — to force the other side, under pain of contempt, to cough up incriminating documents — may be more limited than the broad scope allowed under the Federal Rules of Civil Procedure. And as the #MeToo movement has revealed in employment-related arbitration agreements used to keep a lid on sexual harassment claims, the rules of arbitration could require you to keep quiet, even if you win — as contrasted to open dockets, public trials, and published judicial opinions in a real court system. So even if the consumer wins, the company wins tenfold more: first, they don’t have to deal with negative PR; second, in the aggregate, other plaintiffs could be discouraged from pursuing their claims because they don’t know that other similarly situated consumers have already prevailed.

In 2012, the Supreme Court preempted state contract law to make way for binding arbitration agreements in contracts of adhesion vis-à-vis consumers,[2] on the basis of a 1925 statute.[3] That led to an immediate, predictable, and unfortunate wave of amendments to terms & conditions by websites and businesses — including by Microsoft.[4] Many of those terms were in take-it-or-leave-it clickwrap agreements, and the amendments themselves were practically imposed: in many cases, a consumer could only reject the binding arbitration provision by discontinuing use of the website or terminating her business relationship with the company.[ref]Not all binding arbitration agreements are this unfriendly. See, e.g., Alan Henry, Why You Should Opt Out of Forced Arbitration Whenever Possible, Lifehacker (Mar. 7, 2014, 9:30 AM), https://lifehacker.com/why-you-should-opt-out-of-forced-arbitration-whenever-p-1538184105 (discussing the time-limited possibility of opting out from some of these provisions).[/ref]

What if You Use Microsoft’s Products?

Opting out from arbitration with Microsoft, however, is next to impossible if you still use Windows and Office. Although Windows’s EULA, which too bears a binding arbitration provision now,[5] is separate from the agreement for online services, Windows 10 bundles difficult-to-remove apps and operating system functionality (for example, the Windows Store, OneDrive, Skype, innocuous Weather apps, and integration with Microsoft accounts for device encryption key escrow and logins…) — all of which trigger the Microsoft Services Agreement.[ref]See Microsoft Services Agreement, Microsoft Corp. (Sept. 15, 2016), https://www.microsoft.com/en-us/servicesagreement/ [https://perma.cc/9X6S-JD9U] (listing “Covered Services,” including the Windows Store, OneDrive, Skype, Microsoft account, Microsoft-made apps bundled with Windows 10 such as Maps and Weather, and the operating system feature Cortana).[/ref]

In a few days, Microsoft is updating that agreement — with a whole bunch of changes that are mostly innocuous, with limited effect on their own. A few seem to hint at limited liability subsidiary shenanigans with foreign customers.

A few changes are really bizarre, aimed at segmenting the market for price discrimination. As summarized by Microsoft, “Office 365 Personal, . . . and any other Office 365 subscription or Office-branded Services are for your personal, noncommercial use,” unless you have a business agreement/subscription. (Even email on what used to be Hotmail, and is now branded as Outlook.com, is getting premium features with a Office 365 Personal subscription, so that could be affected by this provision too.)

Aside: Under a strict interpretation, after buying a legitimate license for $70–85 per year instead of pirating the software, could you even use Word to type up website terms & conditions for your friend’s business? Or use PowerPoint to pitch a startup idea to investors? Or send an email about work from your Office 365 Personal–enhanced Outlook.com account?

Anyway, it was mostly the changes to the arbitration agreement that caught my eye:

For customers living in the United States, in the Binding Arbitration and Class Action Waiver section, we’ve clarified that disputes to be arbitrated include those about advertising, marketing, communications, your purchase transaction, or billing. We’ve also summarized AAA Consumer Arbitration Rule R-14(a) that allows arbitrators to rule on their jurisdiction and other preliminary matters, and clarified that courts enforce your and our agreement to bring only individual arbitrations.[6]

Because the terms in place since 2012 were already so company-friendly, these latest changes don’t incrementally skew them much more, even though they signal the company’s intent to gain all the procedural advantages they can from arbitration.

1. The first change is just for avoidance of doubt. The prior language, still retained in revised section 15.a, was broad enough: “The term ‘dispute’ is as broad as it can be. It includes any claim or controversy . . . except [intellectual property disputes].”[7][ref]Ever wondered why companies don’t arbitrate intellectual property disputes? Could it be that federal courts are actually more fair than arbitrators? Or that when it’s fighting off patent trolls, the company wants to set precedent? Or is it just that Microsoft wants to pursue the harshest possible punishments when it’s on the plaintiff’s side — results that arbitrators can’t give?[/ref]

2. The second change is more interesting. This line is creative, and entirely to the benefit of the company, as I’ll address below. 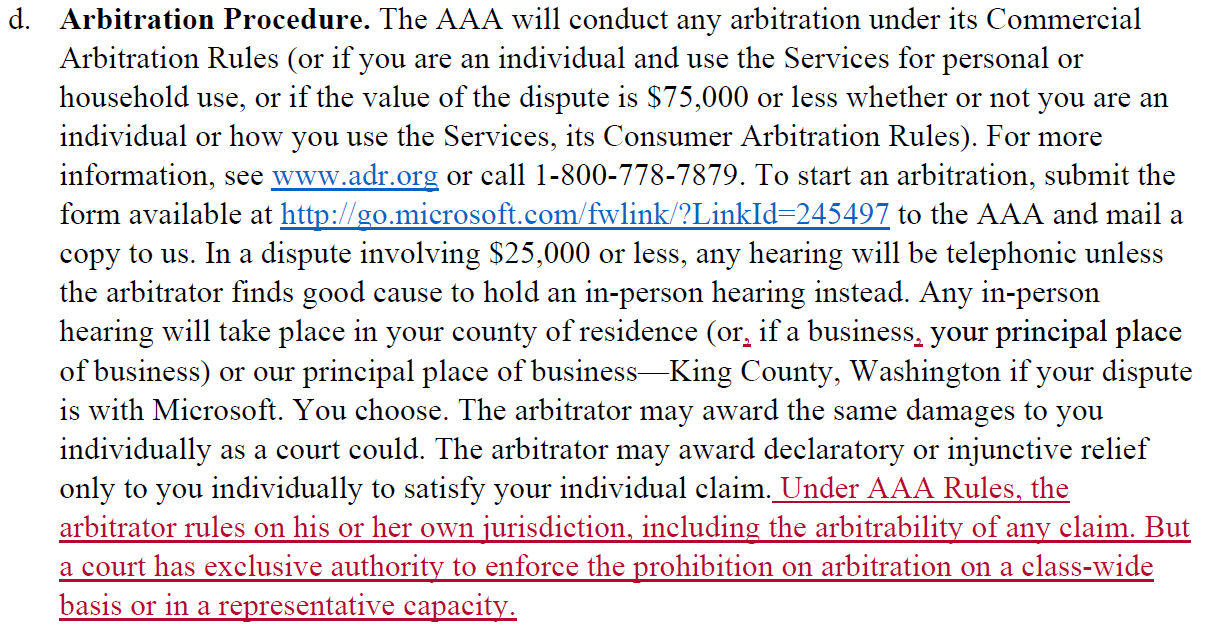 Imagine that you’re a consumer who wants to contest the whole binding arbitration provision as a matter of law. Perhaps you want to argue this: If the agreement to arbitrate was itself invalid (e.g., because a website changed its terms without notice to you and thus you had no ability to reject it by opting out or discontinuing your use of the website), then you have the right to resolve a future dispute as a class action in a real court.

Years ago, in the employment discrimination context, the Supreme Court (by a divided 5–4 vote) ruled that even a contested binding arbitration agreement could enable private arbitrators — whose own power to hear the case and thereby receive fees was at stake — to decide the issue instead of judges.[8] Indeed, the practical consequence was that a clause like “We agree to arbitrate arbitrability,” within the disputed contract, could cut out state and federal courts entirely — other than enforcing the arbitrators’ decision! There is reason to suspect that arbitrators deciding the issue of whether they get to hear a case, and thereby receive fees from it, will be systematically skewed toward forcing individuals to use arbitration.

Interestingly, not all companies that force arbitration for general dispute resolution use this mechanism. Many choose instead to let federal courts decide the issue of arbitrability. Courts can set binding precedent; arbitrators, who are without judicial power, cannot.[9] By letting courts establish precedent that a particular clause in a company’s contract does prevent class action suits from getting off the ground, the company is able to give that clause more strength — against new plaintiffs who come later. Of course, this comes at a risk: those same courts might rule against the company, establishing adverse precedent and opening the floodgates of litigation. And enabling judges to decide the issue of arbitrability means that, when facing suits by individuals, the company has to fight motions in court, at higher cost and under certain plaintiff-skewed rules.

Microsoft’s latest revision tries to have it both ways. By ensuring that courts will decide the issue of compelling arbitration in class actions, but clarifying that individual arbitrators still get to decide arbitrability, the company ensures that 1) class actions get kicked out of court, because the federal courts have to abide by the waiver and agreement to arbitrate; and 2) when an individual brings a suit for herself only, she never gets to step foot in a federal court.[10]

I don’t suppose the next annual report is going to disclose two billion dollars in class action costs and lawyers’ fees?

Frankly, these moves are in step with the industry — but that’s because everyone in the industry, post-Concepcion, is taking it too far. They are all making it impractical for consumers to assert their rights effectively. If this worries you, contact me — I’d love to work with others in resisting the creep of clickwrap agreements and in the restoration of judicial/jury resolution of civil disputes.

Last year, I opted into a class action settlement in Guarisma v. Microsoft Corp., No. 1:15-CV-24326-CMA (S.D. Fla.), as a purchaser of a Surface Book at a physical Microsoft Store, where printed receipts disclosed too much credit card information in direct contravention of a federal law. It’s still impractical for physical stores to impose terms and conditions on walk-in customers, but I bet it won’t be long before the slip you sign for a purchase includes a requirement to submit to arbitration — an unfair practice which, under the Conception holding, cannot be banned by state consumer protection law.

See my Disclosures for disclaimers that apply to this post.

This site uses Akismet to reduce spam. Learn how your comment data is processed.